The Deadly Rose, An Assassin's Tale
by J.M. Lominy 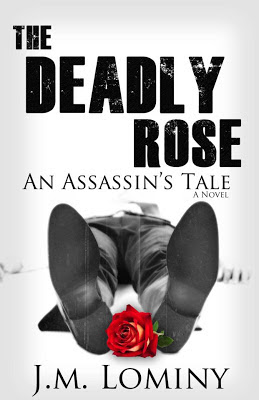 Pierre-André François is handsome, intelligent, and the greatest soccer player in Haitian history.  He also has a well-kept secret; he is an assassin. In fact, Pierre-André François is the vile and feared Haitian assassin known as The Little Rose.  Like a skilled painter, he kills with style and finesse, bringing death in broad purposeful strokes and sweeps of red.  Signing each piece of work with a fragrant red rose.

The year is 1957 and Haiti is in turmoil. Political wrangling has kept the presidency vacant and the country is ripe with civil unrest and upheaval. Political positions are up for grabs and anyone with power, money and courage are out to claim them.  Turmoil, conflict and distrust, the ideal environment for a skilled assassin to leave his mark!

However, the Little Rose is not alone.  After he assassinates a popular senator, he finds himself hunted by an unknown depraved psychopath.  Ever confident in his deadly skills, the Little Rose is put to the test when he comes face to face with the machete-carrying killer.

At five minutes after ten, a woman’s scream sounded, one so true and so frightening that neighbors two streets over came out to investigate.  The scream came from the home of Laplace.

Laplace’s great wealth of a house stood sturdy and strong among beautiful homes in the heart of Pétion-Ville, on a hillside off of Rue Louverture.  It faced west, smiling in the direction of the capital, with darling green paint and a grand balcony gracefully overlooking a beautiful front yard garden.  On a clear sunny day, the garden’s colorful collage could be seen from Port-au-Prince, its carpet of roses and lilies planted and maintained by Mr. Laplace himself.  A new seven-foot, decorative, cinder-block wall stood erect, forming a perfect rectangle around the perimeter of the property.  It was the only house in the neighborhood to be so screened-in, a recent security measure undertaken because of the increasing political turmoil.

Minutes before she took claim to her screams, Madame Laplace was sound asleep, serenaded by crickets under a cool, soft, and steady breeze–a paradise she gladly welcomed.  Life could not have been any better.  She was dreadfully awakened by two thundering sounds, wondering if cannons had been fired outside her window.  The sounds put a momentary pause to her heart, then a terrifying gallop.

Afraid to open her eyes, she fumbled over pillows in the dark and found her husband inches away.  “Theodore wake up!  They’re shooting outside,” Madame Laplace said scared and shaken.  Mr. Laplace answered with silence.     Their second floor bedroom faced a courtyard that led to a back entrance.  That same passageway was now crowded with two dead bodies, men who were charged with their safety.

“Theodore didn’t you hear me? They’re shooting outside.”  Madame Laplace repeated as she shook Theodore Laplace by the shoulder, still no answer.

An uncomfortable silence ensued, if only for a second.  To Madame Laplace it seemed an eternity.  Tightness crept up her chest.  Suspicion lingered in the back of her thoughts.  He was never difficult to awaken and rarely silent, even as he slept.  Just minutes ago, it seemed, his snoring was a continuous humming that kept cadence with the crickets.

Gradually she opened her eyes, withdrawing her ivory hand from his broad shoulder.  A thick warm liquid caked her hand.  With controlled panic, she fumbled for the matches.  With shaking hands she struck the box of matches, almost too petrified to look, but knowing she had to.

The fire took hold of the match with a bang, sending sparks of light everywhere, exposing the red liquid covering her delicate fingers.  Through a haze of fear and the onset of nausea, she saw.  Blood, the life force—as red as it was thick and still warm to the touch—was undeniably present.

Madame Laplace couldn’t believe what she saw, but at the same time it was indisputable.   It must be a trick, a lie, a mirage, she thought.  She blinked as if to clear her vision and wish the blood away.  Her head started to spin out of control like a coconut tumbling down a tree, in a hurry to meet earth.

“My God,” escaped from her quivering lips.  She turned pale as the meat in the center of a coconut and shook uncontrollably.  She knew before she saw, deep down in her soul, she knew.   Her innards twisted into cramping knots.  Her suspicion was to be proven accurate.  She knew that Theodore Vladimir Laplace had walked through the gates manned by Ghede, the voodoo god of the dead.

She stared at her own fingers caked with the congealed blood, wishing it were the past or a dream or even a crude joke by a malevolent spirit. Her small-reddened lips curled like a slingshot, stretched thin, ready to be released.  With tears already forming in her eyes and her chest aching, she suddenly found it difficult to breathe, to think, when only moments ago it came so easily.

Time seemed to have slowed as she faced her husband of twenty-five years. Through blurred vision produced by rain-sized tears, she saw, paused, and gasped.  The ghostly portrait of the former Theodore Laplace was smiling at her.  His mouth was stuffed with a dirty rag, causing his already corpulent cheeks to spread out.  His eyes stared up at heaven as if questioning God “Why now? Why me?”  His neck sported a gaping V-shaped smile, the traditional bowtie cut left behind by a taker of souls, a Haitian assassin—the assassin’s baptism, as it was known amongst criminals.  Only the cruelest of assassins can cut a man’s throat, leaving him with a flowing, red grin that mocked the living, as if to say death was not so bad.

© 2013 All rights reserved. Book excerpt reprinted by permission of the author, J.M. Lominy.  This excerpt is used for promotional purposes only. Do not reproduce, copy or use without the publisher's written permission. Share a link to this page or the author's website if you really like this promotional excerpt.


Meet the Author
Life began for J.M. Lominy in Port-au-Prince, Haiti.  As a husband, father, nurse and veteran Lominy has been making room to write since 2000.  Specializing in Historical Fiction, he is the author of the upcoming book, The Deadly Rose, An Assassin’s Tale.

His work, both poetic and determined in voice, places an emphasis on the Haitian experience as witnessed through the life of passionate characters.  Mr. Lominy currently resides in Georgia with his wife and his three sons.  Visit J.M. Lominy at:  http://jmlominy.com