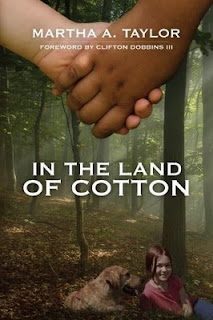 
Ella: Hello Martha! Tell us a little about you and your book.
My writing career has been, until the last few years, one of those “don’t quit your day job arrangements”. Having made my living as a tax professional, I found early on that my creative writing skills came in handy when I had to write client letters to the IRS.

Ella: Answer this for us: Why am I powerful?
I am powerful because I never once accepted there were things in this world I could not overcome; I could not conquer; I could not embrace.

Ella: Please introduce us to your book, In the Land of Cotton.
As a child growing up in Memphis I could not have known that the Boyd family, the main characters in In the Land of Cotton, would have such a haunting effect on me. Last fall, their indelible personas became overwhelming. They were all I could think about. I sat down one afternoon and the book began to flow to paper. I still had vivid memories of Cypress Grove, a primitive farm the Boyd family had lived on since the days of the Civil War. They had no electricity, no running water and certainly no refrigeration yet they wanted for nothing. It was a step back in time but, as a child, I wanted to be part of that. As the reader journeys through the 1960's, they travel along side the Boyd family as they experience the historic events of that decade. You will find as a reader that you will become immediately vested in the characters. The Boyd's have the voice for every Black American that lived through those turbulent times.

Immerse yourself in this highly anticipated political docu-drama set in the Deep South amidst the backdrop of the Civil Rights Movement. Martha was a young white girl living in the Deep South, inundated with the racist sentiments of the times. But Martha's natural curiosity and generous heart led her to question this racial divide. When she discovered a primitive Negro family living deep in the woods near her house, everyone's life changed forever.Take the journey of a lifetime alongside Martha as she forges relationships that lead to self discovery and a clearer understanding of the world around her. In the Land of Cotton provides an outstanding snapshot of life in the South during those troubled times - a snapshot everyone should take a close look at, regardless of era or color. The year was 1956.


Ella: What makes your book stand out and would entice a reader to pick it up?
I hope the cover represents the book well. I wanted it to preview the contents and draw the reader inside. It makes the reader curious.


Ella: Ultimately, what do you want readers to gain from your book?
Ultimately, if you lived through the 60's, I want you to revisit all the history that decade produced. If you weren't alive in the 60's, you need to learn about that decade from someone who had a ringside seat.


Ella: What is the most surprising thing you have learned in creating books?
The most important thing I have learned from writing books is that its not just words on a page. It becomes a creation from your heart. With my first book I discovered it could be a very personal journey that you shared with only your readers.


Ella: What advice would you give a new writer?
There are so many things I would share with a new writer but these are my top three.

#1- Pick a topic you know well or that you have enough interest in to do the research. Most new writers write on subjects that are mostly autobiographical in nature. There's a reason for that.


Ella: What can we expect from you in the future?
I am very committed to the Boyd’s and bringing the various family stories to life. The next book, Dixie, will begin right before the Civil War and end at 1900. I can hardly to see how the historical events of those years will unfold and how they will effect the Boyd's.

Martha A. Taylor, Author
"In the Land of Cotton"
Email: Taylortsg@Aol.com

Racism from the perspective of an innocent white girl who learns firsthand how absurd it is. Book Review by cashbacher@yahoo.com; See all my reviews (TOP 50 REVIEWER, Amazon)

The innocence of youth is a beautiful thing, it is refreshing to witness and gives the world so much, except when it is a young white girl being exposed to a poor black family in the southern United States in the 1950's. In that context, it could have meant the death of some of the participants.

Martha was a young white girl who bonded with her black maid when her parents were generally absent. Her natural curiosity and openness led her to an enclave of an extended black family living in primitive conditions. Martha was quickly "adopted" by the family, as they allowed her to be a part of their activities and she responded in kind. Martha's parents were racist and she maintained her relationship with the black group in secret for many years and even over great distances.

Martha also fell in love with Silas, first a playmate from the black family, then a companion and eventually a fiance. Silas was extremely intelligent and handsome and when he was old enough, he went off to school in Chicago and then joined the military, becoming a helicopter pilot flying rescue missions in Vietnam. Silas is seriously injured and Martha rushes to his bedside to take care of him.

One simple, yet significant scene is when a white soldier in the hospital wing with Silas objects to the black-white relationship. Another white soldier immediately responds, telling the white soldier, "That man saved my life, he can have whatever girlfriend he wants." The history of the civil rights movement, from the Rosa Parks refusal through the assassination of Martin Luther King is chronicled and placed in context.

Therefore, the story has two significant and complex tracks. The story of two people who grow to love each other within the bounds of a truly extended "family" and the broader context of the segregation of the south and how it was finally and thankfully forever broken. Given that the names of the title character and the author are identical, it seems clear that the book is an autobiography, which increases the power of the depiction of the events.